Suzuki Motor Corporation’s compact car Swift, which was launched as a world strategic model in 2004, has reached cumulative worldwide sales of four million units in August 2014 (nine years and nine months since the start of sales in 2004).

The Swift reflects Suzuki’s expertise in compact cars and dedication to creating models that are sporty, stylish, and fun to drive. It was first produced and sold in Japan as a world strategic model in November 2004. In the following year, production and distribution began in Hungary, India, and China. Full-model change was made in 2010, and production and distribution also began in Thailand in March 2012.

Especially in India, ever since its launch in 2005, the Swift steadily increased its sales in line with the market expansion due to economic growth, such as by adding diesel variants and sedans. Of the four million units, units sold in India account for approximately half of them. Also, approximately 19% were sold in Europe, and approximately 11% were sold in Japan.

The Swift has been earning high appraisal such as by winning various car of the year awards in Japan, as well as in countries worldwide. It is currently produced in eight countries worldwide, and has been favored in more than 140 countries and regions around the world.

Nov. 2004:     First-generation Swift as a world strategic model is released and launched in Japan

Jun. 2010:      Production of the new (second-generation) Swift for Europe begins at Magyar Suzuki in Hungary 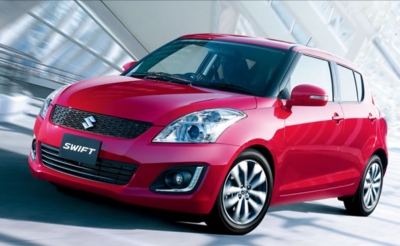