Overview of Suzuki exhibits for the Indonesia International Motor Show

PT. Suzuki Indomobil Motor (SIM), an Indonesian subsidiary of the Suzuki Motor Corporation, has unveiled the Karimun WagonR GS, a new variant of the compact car Karimun WagonR at the 22nd Indonesia International Motor Show, which is being held in Jakarta from 18 September, 2014*. SIM is exhibiting automobiles including reference exhibits and production models.

At the press conference held on 18 September, Executive Vice President Toshihiro Suzuki said, “We plan to start a new automobile assembly factory located in the Greenland International Industrial Center from the beginning of 2015. Through this we will expand the production capacity of automobile in Indonesia to 250,000 per year. In addition to responding to the growing demand in Indonesia, we are also aiming to intensify exports to surrounding ASEAN countries and other area of the world.”

Karimun WagonR GS (1,000cc) is a new variant of the Karimun WagonR which was launched in November 2013. SIM will produce and distribute it as a model that meets the Indonesian government’s requirements for LCGC (Low Cost Green Car) scheme. Based on the Japanese minicar WagonR Stingray, it adopts a stylish exterior design and a premium black interior. It will meet the needs of users including young customers purchasing a car for the first time. 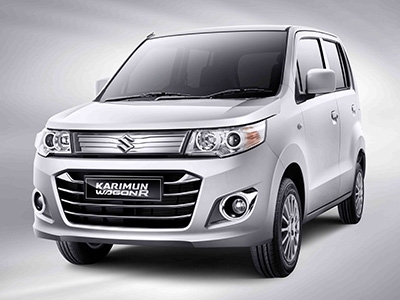