As of today, Naoyuki Takeuchi has been appointed Chief Executive Officer at Magyar Suzuki Corporation. Returning to his original field of expertise, Ryoichi Oura will be in charge of production as the top executive of that area.

As of today, Suzuki Motor Corporation has appointed Naoyuki Takeuchi, member of Magyar Suzuki Corporation’s Board of Directors as the Hungarian company’s Chief Executive Officer. The new CEO will replace Ryoichi Oura, who fulfilled the post of CEO over the past year while also retaining his responsibility as the leader in charge of production.

Ryoichi Oura was appointed to the post of CEO in May 2014. In the past year, under Ryoichi Oura’s direction, Magyar Suzuki Corporation successfully prepared and launched the production and sales of Suzuki’s new global model, the Vitara. Holding two functions simultaneously at Magyar Suzuki, Mr. Oura was in charge of production and general company affairs as CEO during the new Vitara model’s preparation and launch.

With the new Vitara’s serial production launched and the model officially entering commerce on 5 March 2015, Mr. Oura has now handed over the general company affairs to Mr. Naoyuki Takeuchi. Returning to its well-tried and tested earlier structure, the company will again divide the direction of production and the function of CEO. Ryoichi Oura will continue in his field of specialization as the Head of Production and member of Board of Directors. This will allow Mr. Oura to fully dedicate his skills and expertise to production increasing rapidly due to high demand of the new Vitara.

Naoyuki Takeuchi took his diploma as mechanical engineer at Yamanashi National University, and joined the Suzuki Group in 1980. He was transferred to Magyar Suzuki Corporation in 2012, took part in the development of the current Swift model as Chief Engineer, and until his appointment as CEO, he was the Head of Purchasing and Quality at Magyar Suzuki. The new Chief Executive Officer is 60 years old, married with 2 sons. 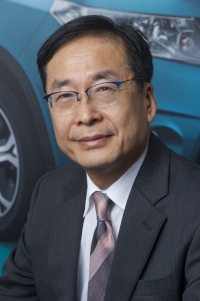